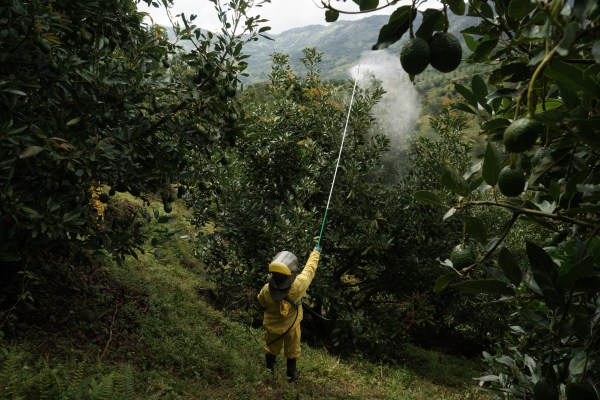 In the first real test of the potentially transformative power of its food-preserving technology, the Santa Barbara, Calif.-based Apeel Sciences is bringing its innovative food treatment and supply chain management services to distribution centers in select markets in Asia, Africa and Latin America.

The goal is to alleviate food insecurity among farmers, who comprise one of the most susceptible populations to issues of malnutrition, according to Apeel’s chief executive James Rogers.

“The majority of fruits and vegetables grown on this planet are grown by small farmers and two thirds of the people who are food insecure are also farmers,” said Rogers.

The reason why farmers are more at-risk than other populations stems from their inability to get the most value out of their crops, because of the threat of spoilage, Rogers said

By introducing its preservative technologies that deter spoilage and providing willing buyers among existing Apeel customers in markets like the U.S., Denmark, Germany and Switzerland Rogers said the company can have an outsized impact to improve the amount of money going into a farmer’s pocket.

“The program with the IFC is to build supply chains out,” he said. “The value is not just in the longer-lasting produce, it’s in the market access for that longer lasting produce.”

The initial markets will be in Mexico, Costa Rica, Peru, South Africa, Kenya, Uganda and Vietnam where Appeal’s tech will treat avocados, pineapples, asparagus, and citrus fruits like lemons, limes, and oranges.

In some ways it’s the culmination of the work that Appeal has been doing for the past several years, getting grocers around the world to buy into its approach to reducing waste.

The company has always put smallholder farmers at the center of its company mission — ever since Appeal was founded in partnership with the Bill & Melinda Gates Foundation and the Department for International Development. The intention was always to extend the shelf life of fruits and vegetables produced by farmers without access to the modern refrigerated supply chain. It’s just that for the past several years, the company had to refine its technology and build out a retail network.

To further that aim, Apeel has raised over $360 million, including a $250 million round of funding which closed earlier this year.

The fruition of Rogers’ plans will be as the company brings demand from international markets to these local growers through regional exporters.

Without access to a refrigerated supply chain, much of what small farmers produce can only reach local markets where supply exceeds demand. The perishability of crops creates market conditions where these fruits and vegetables can’t make it to export, creating market dynamics that exacerbate poverty and increase food loss and food waste among the people who make their living farming, Appeal said.

“With extra time we can link those small producers into the global food system and help them collect the economic value that’s intrinsic to that natural resource,” said Rogers.

The introduction of new demand from international markets, which can be fulfilled if crops are treated with Appeal’s technology can create a virtuous cycle that will ideally increase prices for crops and bring bigger payouts to farmers. At least that’s the vision that Rogers has for the latest implementations of Appeal’s technology at regional distribution hubs.

There’s the potential that the middle men who’re distributing the produce to foreign buyers may collect most of the value from the introduction of Appeal’s technology, but Rogers dismisses that scenario.

“The work is to incorporate those small producers more directly into the supply chain of the exporter. Now that there’s familiarity with the technology you can utilize the tech to create cooperative value and use those cooperatives to unlock value for the very small producers,” he said. “By growing the demand for produce in those markets that supply has to come from somewhere. The exporters earn their cut on a volume basis. The way they increase their value is to grow their volume. They want to grow the volume that’s suitable for export and the demand. Then the challenge flips and it becomes not a demand challenge but a supply challenge. And they have to incentivize people to feed into that supply.”

To finance this international rollout, Appeal has raised another $30 million in funding from investors including the International Finance Corp., Temasek and Astanor Ventures .

“Innovative technologies can change the course of development in emerging markets and save livelihoods, economies, and in this case, food,” said Stephanie von Friedeburg, interim Managing Director and Executive Vice President, and Chief Operating Officer, of IFC, in a statement. “We are excited to partner with Apeel to invest in a game-changing technology that can limit food waste by half, enhance sustainability, and mitigate climate change.”

Written By
admin
More from admin
Analysis of a trove of data extracted from the Chicago Police Department...
Read More