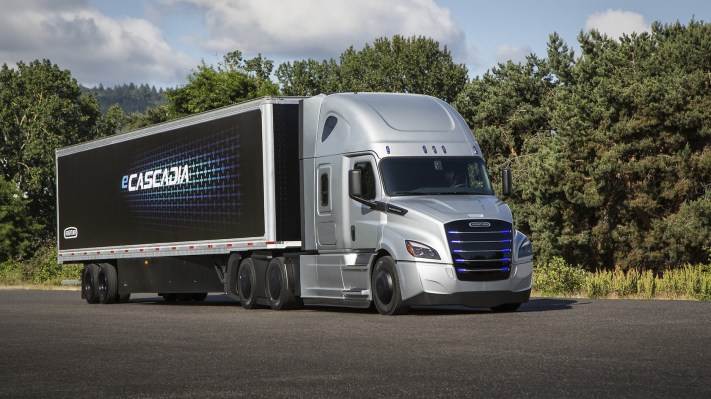 Two automotive giants are teaming up to bring self-driving semi-trucks to market. Under this deal, Waymo and Daimler Trucks are partnering to build an autonomous version of the Freightliner Cascadia truck. This is Waymo’s first deal in the freight business.

The truck would be equipped with level 4 autonomous technology, meaning it could drive itself without a human but only in pre-defined areas. It is expected to be available in the US “in the coming years.”

“We have the highest regard for Daimler’s engineering skills and broad global truck product portfolio,” said John Krafcik, Waymo CEO, in a released statement, “and so we look forward to scaling the Waymo Driver, together with our new partner, to improve road safety and logistics efficiency on the worlds’ roadways.”

This deal provides Daimler Trucks, the world’s largest maker of commercial vehicles, with Waymo Driver. This is a suite of vision sensors, software, and the computing system powering the platform.

Numerous companies are approaching autonomous trucking as its seen as a massive opportunity ready for a technology overhaul.

“The market is massive; I think in the United States, $700-$800 billion a year is spent on the trucking industry. It’s continuing to grow every single year,” said Boris Sofman, Waymo Director of Engineering and Head of Trucking, earlier this month at TechCrunch Sessions: Mobility. “And there’s a huge shortage of drivers today, which is only going to increase over the next period of time. It’s just such a clear need. But it’s not going to be overnight — there’s still a really long tail of challenges that you can’t avoid. So the way we talk about it is the things that are hardest are just different.”

Written By
admin
More from admin
A long-running investigation in the European Union focused on the transparency of...
Read More