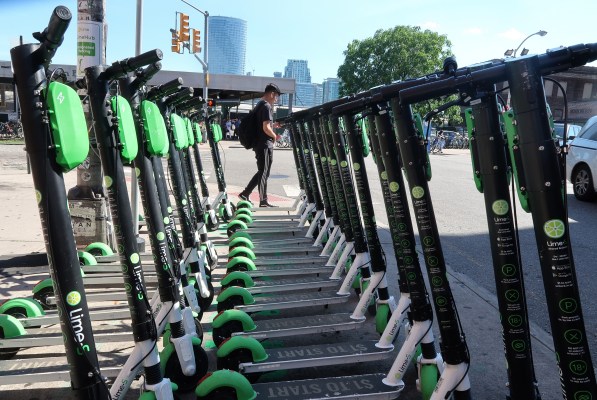 Micromobility company Lime says it has moved beyond the financial hardship caused by the COVID-19 pandemic, reaching a milestone that seemed unthinkable earlier this year.

In short, the company is now largely profitable.

During the WSJ Future of Everything event Thursday, Lime CEO Wayne Ting painted a far rosier picture of the company’s future than one might have expected.

There was a time when Bird and Lime, competing domestic scooter rental companies, were raising capital at a torrid pace, fighting for market share, regulatory breathing room and sidewalk real estate. Then, the pandemic hit and the companies had to take shelter.

Lime underwent a round of layoffs in April, taking on capital from Uber the next month in a down-round that brought its valuation under the $1 billion mark. And as it announced in a blog post that TechCrunch reviewed before publication, it paused most of its operations for a month during the early COVID-19 days.

“It was certainly a very, very tough decision for us earlier this year and I know we weren’t the only company during COVID,” Ting said during the event. “I think it’s been in so many ways helpful to us to realize how hard these choices can be. We’re going to be growing headcount again. We’re going to do so in a careful way so that we’re not going have to make hard choices like the ones we made earlier this year.”

Now things are better, Lime says. Much better. Indeed, the company claims that it is the “first new mobility company to reach cash-flow positive for a full quarter.”

Cash flow positivity, in general, is an important threshold for a startup to reach as it implies that the company can largely self-fund from that point forward, limiting its dependency on external cash for survival.

Perhaps the most bullish data point from Lime is that it expects to be full-year profitable in 2021. TechCrunch asked for specifics because again how one measures profitability matters. It turns out, Lime is basing this projection on EBIT, as opposed to more traditional net income. For a startup this is not a surprising decision, but before we declare Lime fully ‘profitable,’ we’ll want some more GAAP metrics.

Still, it appears that Lime is not going to die, and is, importantly, putting capital into developing new products. The company provided the first example of that new product pipeline on Thursday with the launch of the Gen4 scooter in Paris. It also teased a so-called “third and fourth mode” in the first quarter of 2021 as well as the addition of a swappable battery.

The scooter company wouldn’t give TechCrunch much information about what these third and fourth modes will be. The first two modes are bikes and scooters, which leaves skateboards, cars, flying cars and boats?

Lime did give TechCrunch a little bit of clarification, stating that “move beyond,” means the company will be operating an additional mode, accessed through the Lime app, in line with its goal to serve any trips under five miles. These modes will build on the Lime Platform play, but this will be operated by Lime rather than a partner.

Lime has long discussed reaching profitability. Perhaps because it and its competitor Bird were infamous for their losses during their early-unicorn period.

By November of 2019, Lime was talking about reaching EBIT positivity in 2020. But the start of 2020 was not kind on the company, with 100 of its staff losing their jobs and 12 markets getting dropped. At the time TechCrunch wrote that “Lime is hoping to achieve profitability this year by laying off about 14% of its workforce and ceasing operations in 12 markets,” with the company itself writing at the time that “financial independence [was its] goal for 2020, and [that it was] confident that Lime will be the first next-generation mobility company to reach profitability.”

Depending on how you measure profitability, that could be true.

Things didn’t get easier for Lime later in the year. Its competitor Bird underwent layoffs, and Lime cut more staff in April. At the time, Lime said that it was focused on coming “back stronger than ever when this is over.”

The company is certainly in better shape than it was in April and May. So, how did Lime come back from the brink? In its own estimation, the company took time during its pause to “drill down on getting the business right, narrowing [its] focus and strengthening [its] fundamentals.” That might sound like corporate babble, but by taking a nearly full stop in its operating business, Lime could probably see a bit more clearly what was working and what was not. And with some cuts to what wasn’t, it could set up a future in which its operations were leaner, and more unit-economically positive.

And, now, here we are asking niggling questions about just what sort of profit Lime is really making. Instead of, you know, who might buy its leftover office furniture. It’s a nice turnaround.