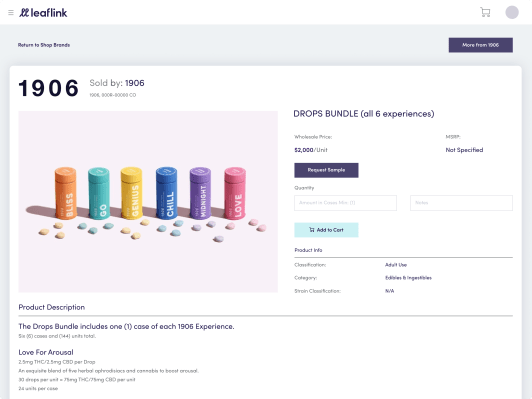 LeafLink is today announcing it raised a $40 million Series C financing round, led by Founders Fund with participation from Thrive Capital, Nosara Capital, and Lerer Hippeau. This round of financing brings the total amount raised by the company to over $90 million.

This financing round is Founder Fund’s largest technology investment in the cannabis space.

Since its founding in 2015 LeafLink has become a significant player in legal cannabis. With a 130 employees and operating in 27 markets, the company says it has 32% of the U.S. wholesale cannabis market, resulting in an annualized gross merchandise value of over $3 billion. LeafLink sees the Series C in helping grow the business through new processes and services.

“This fundraising round is monumental for a technology company like LeafLink as we continue to define a space that shows no signs of slowing down,” said Ryan G. Smith, Co-founder, and CEO of LeafLink, said in a released statement. “We’re honored to partner with Founders Fund as we scale our marketplace technology across the growing cannabis industry. Our eyes are set on bringing efficiency and innovation to the supply chain, and we’re excited for cannabis to serve as a model for more legacy industries in the future.”

Right now, LeafLink serves as a critical service for the cannabis market by connecting retailers with suppliers and providing supply chain liquidity through its e-commerce marketplace. With the additional $40m, the company expects to expand its offering with new brands and retailers and expand into the new markets opened up by the 2020 election.

“The U.S. appears to be on a path to full federal legalization over the next few years,” said Founders Fund partner Napoleon Ta. “We believe we’ll start to see some massive success stories in the cannabis space as regulations change and that LeafLink will be one of the winners.”

In a statement to TechCrunch, Ta says LeafLink is a tech-enabled wholesale marketplace connecting thousands of wholesalers and retail buyers. He sees the investment as a great opportunity to work with a company he and Founders Fund see has the potential to bring an entire industry onto one platform.

“We invested in LeafLink because the team is merging best practices from e-commerce marketplaces with B2B technology to streamline an entire industry’s supply chain and operations,” said Ta. “We’re excited to make our largest investment in the cannabis space to date in LeafLink.”

Written By
admin
More from admin
Duolingo CEO and co-founder Luis von Ahn was tired of the gray...
Read More