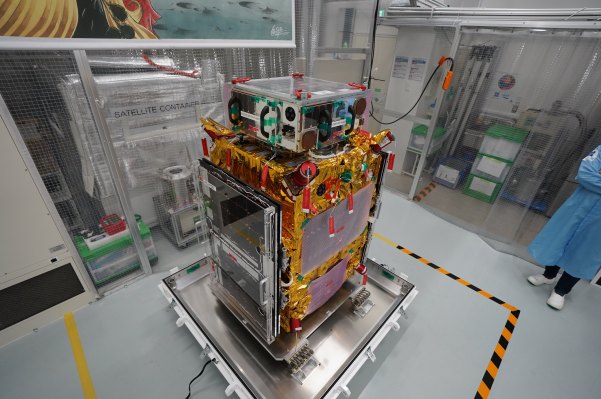 Japanese startup Astroscale has shipped its ELSA-d spacecraft to the Baikonur Cosmodrome in Kazahkstan, where it will be integrated with a Soyuz rocket for a launch scheduled for March of next year. This is a crucial mission for Astroscale, since it’ll be the first in-space demonstration of the company’s technology for de-orbiting space debris, a cornerstone of its proposed space sustainability service business.

The ELSA-d mission by Astroscale is a small satellite mission that will demonstrate two key technologies that enable the company’s vision for orbital debris removal. First will be a targeting component, demonstrating an ability to locate and dock with a piece of space debris, using positioning sensors including GPS and laser locating technologies. That will be used by a so-called ‘servicer’ satellite to find and attach to a ‘target’ satellite launched at the same time, which will stand in for a potential piece of debris.

Astroscale intends to dock and release with the ‘target’ using its ‘servicer’ multiple times over the course of the mission, showing that it can identify and capture uncontrolled objects in space, and that it can maneuver them for controlled de-orbit. This will basically prove out the feasibility of the technology underlying its business model, and set it up for future commercial operations.

In October, Astroscale announced that it had raised $51 million, making its total raised to date $191 million. The company also acquired the staff and IP of a company called Effective Space Solutions in June, which it will use to build out the geostationary servicing arm of its business, in addition to the LEO operations that ELSA-d will demonstrate.

Written By
admin
More from admin
Apple has released a set of security updates for iPhones, iPads, and...
Read More