Over the next few weeks, the venture capital industry will compile and release data concerning its Q4 2020 performance, capping a year that saw the world of private capital freeze, thaw and burn.

But we can get a peek at a critical part of the VC universe early, thanks to a preview of global fintech investment results from CB Insights. The dataset deals with worldwide investments into fintech companies from the start of October through December 12th.

The Exchange explores startups, markets and money. Read it every morning on Extra Crunch, or get The Exchange newsletter every Saturday.

Given that the last two weeks of the year are not famous for productivity, the dataset we have should prove representative for this critical slice of the venture capital market. (For our look at the third-quarter fintech VC market, head here.)

To be honest, I didn’t plan on writing up this data when I first dug into it; I was prepping for later releases, hoping to ground myself ahead of the full numbers. However, the collected results aligned with several themes that cropped up during 2020, making it a representative capstone of sorts concerning the year’s venture capital market. So it was too interesting to not unpack.

What happened to fintech venture capital investment in Q4 and 2020? Some startup stages and regions did well, but amidst the good news, one of the hotter domestic segments of startup land is not set to have a good global year. Let’s get into the numbers.

A final warning: although these results are missing a few weeks’ worth of inputs, we believe these numbers will prove more than directionally accurate when all results are tallied and released by the various organs of venture data tracking.

Using numbers that include projections for the rest of 2020, it’s clear that the fintech venture capital world is not equally distributed. If you are reading this in the United States, for example, or the UK, you might be surprised to learn that CB Insights expects global fintech venture capital deal and dollar volume to fall in 2020. Surely not, with all the neobank and trading-platform deals we saw?

Yes, actually, because while fintech investment has risen in dollar terms in both North America and Europe, huge declines in Asia have overshadowed results in the other two regions. Here’s the clip of the preview chart: 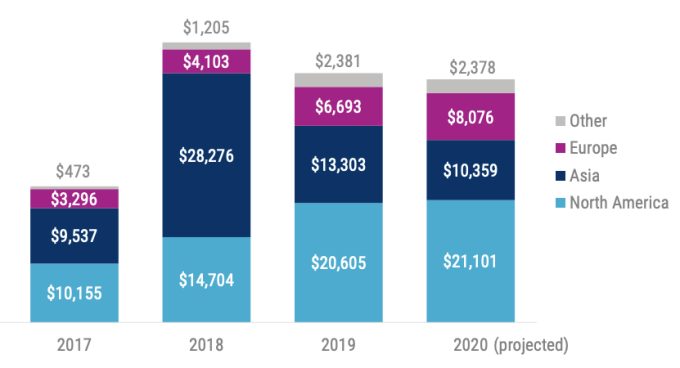