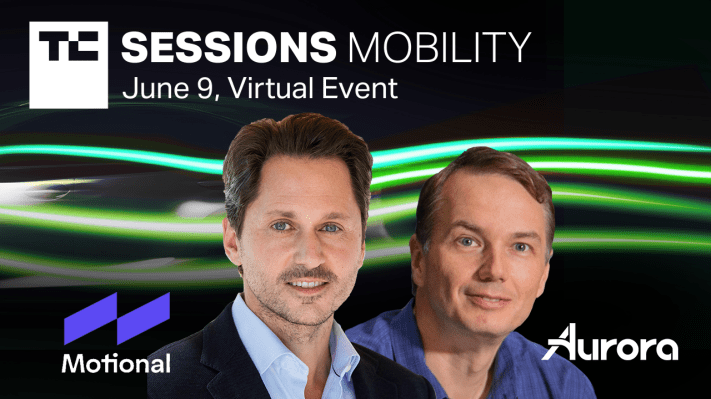 Long before the multi-million-dollar acquisitions and funding rounds pushed autonomous vehicles to the top of the hype cycle, Karl Iagnemma and Chris Urmson were researching and, later, developing the foundations of the technology.

These pioneers, Iagnemma coming from MIT, Urmson from Carnegie Mellon University — would eventually go on to launch their own autonomous vehicle startups in an aim to finally bring years of R&D to the public.

That task isn’t over quite yet. Urmson, who is co-founder and CEO of Aurora, and Iagnemma, who is president and CEO of Motional, are still working on unlocking the technical and business problems that stand in the way of commercialization.

TechCrunch is excited to announce that Urmson and Iagnemma will be joining us on the virtual stage of TC Sessions: Mobility 2021. The one-day event, scheduled for June 9, is bringing together engineers and founders, investors and CEOs who are working on all the present and future ways people and packages will get from Point A to Point B. Iagnemma and Urmson will come to discuss the past, the present challenges and what both aim to do in the future. We’ll tackle questions about the technical problems that remain to be solved, the war over talent, the best business models and applications of autonomous vehicles and maybe even hear a few stories from the early days of testing and launching a startup.

Both guests have a long list of accolades and accomplishments — and too many, to cover them all here.

Urmson has been working on AVs for more than 15 years. He earned his Ph.D. in Robotics from Carnegie Mellon University and his BSc in computer engineering from the University of Manitoba in 1998. He was a faculty member of the Robotics Institute at Carnegie Mellon University where he worked with house-sized trucks, drove robots in the desert, and was the technical director of the DARPA Urban and Grand Challenge teams. Urmson has authored more than 60 patents and 50 publications.

He left CMU and was one of the founding members of Google’s self-driving program, serving as its CTO. In 2017, Urmson co-founded Aurora with Sterling Anderson and Drew Bagnell.

Iagnemma is also considered an authority on robotics and driverless vehicles. He was the director of the Robotic Mobility Group at the Massachusetts Institute of Technology (MIT), where his research resulted in more than 150 technical publications, 50 issued or filed patents, and numerous edited volumes, including books on the DARPA Grand Challenge and Urban Challenge autonomous vehicle competitions. He holds MS and PhD degrees from MIT, where he was a National Science Foundation fellow, and a BS from the University of Michigan, where he graduated first in his class.

In 2013, Iagnemma co-founded autonomous vehicle startup nuTonomy, one of the first to launch ride-hailing pilots. The company was acquired by Aptiv in late 2017. Aptiv and Hyundai formed the joint venture, which he now heads, in 2020.

Stay tuned for more announcements in the weeks leading up to the event. Early Bird sales ends tonight, May 7 at 11:59 pm PT. Be sure to book your tickets ASAP and save $100.

Written By
admin
More from admin
SpaceX has another successful human space launch to its credit, after a...
Read More