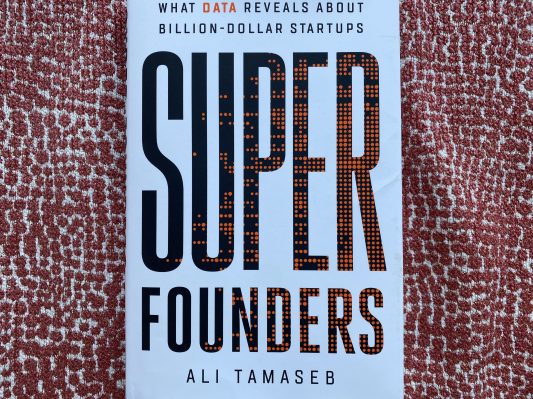 There’s a lot of how-to guidance out there when it comes to starting a company, and much of it has reinforced certain beliefs, including that solo founders don’t get very far on their own, that the most successful founders attend a small circle of top schools, and that the best companies are created by people who launched them to solve a personal problem into which they had a particular insight.

Ali Tamaseb, who earlier studied biomedical engineering in London, attended business school at Stanford, and founded a wearable tech startup before joining the venture firm DCVC as an investor in 2018, says that lot of that guidance is, well, misguided. Tamaseb says he knows this because over the past four years, to improve his own decision-making, he amassed more than 30,000 data points about so-called “super founders,” from their age when their breakout company was founded, to the ranking of the school they attended, to how many competitors they faced from day one and in doing so, wound up discovering that much of what is espoused in startup circles is off the mark.

Tamaseb has now written about his findings in a new book called Super Founders: What Data Reveals About Billion Dollar Startups. We talked with him yesterday. Our chat has been edited lightly for length.

TC: Why write this book?

AT: When I was a founder, a lot of my perception was shaped through this lens of what the media tells us. Even now, when I’m on Twitter or Clubhouse, a lot of what I hear feels very different compared with what I see as a venture capitalist. Of course, nobody knows everything, and even the most successful venture capitalists have maybe invested in 10 of these breakout companies in their lifetime. So to get to the ground truth, and because nobody has collected this data because it’s hard, over four years of weekends and evenings, I began to collect this data, which breaks out to around 65 data points per company.

TC: What are some of these data points and how much of them were publicly available?

AT: The data includes the career path of the founder and whether their earlier roles were technical or not;  the founder’s education and degree and the school they attended; what the market looked like when their company was started, including what the defensibility factors were; how many competitors they had; their fundraising history — how much did they raise and when and from whom?

There’s a bit of this data in a Pitchbook or Crunchbase, but nobody had put [these other pieces] into [context]. I was going to their LinkedIn profiles, reading interviews, going to the internet’s Wayback Machine and other archives to read reports to understand what these companies looked like at the time they were founded. I also called a lot of these founders to ask them for answers where I couldn’t find the information. It was a very manual thing.

TC: How many founders did you research?

AT: I researched more than 200 unicorns, [launched by] around 500 founders. Because no study has meaning unless you also collect data on a control group, I selected companies that over the same time period had raised a minimum of $3 million in venture capital as my baseline group. I then compared the two groups based on these 65 different elements.

TC: You own research led you to invest in the primary and urgent care company Carbon Health on behalf of DCVC. What made you think this company was a surer bet?

AT: Specifically here, this founder [Eren Bali] had had built a bunch of companies before, and a bunch had failed or succeeded on a smaller level, then his last company was [the edtech giant] Udemy, where he spent four years. One of the key things that I observed in the data is that it’s all about these small steps, and even the small exits. Around 60% of these “super founders” started something earlier, and many actually lost a bunch of money; just 42% of them had a previous exit of $10 million or more, so the majority had “failed” in the world of venture capital. But [the data suggests that] practice makes perfect.

TC: You also found that solo founders aren’t doomed to run smaller companies, despite some earlier thinking by Y Combinator’s Paul Graham that you need at least two cofounders to do something big.

AT: Right, 20% of the founders in both groups — the unicorn and non unicorn group — were solo founders, so VCs are funding solo founders and they are building billion-dollar companies. Basically, one out of every five unicorn companies has a solo founder. So I think that’s another narrative that gets retold, including on Twitter, but that doesn’t match reality. Flexport, for example, has a solo founder [in Ryan Petersen]. So does CarGurus, which was founded by Langley Steinert, who, by the way, first cofounded TripAdvisor [and more recently founded ApartmentAdvisor].

TC: Your book also asserts that there are plenty of founders of billion-dollar companies that didn’t attend elite American universities.

TC: Two other observations in the book that are interesting are that half the founding CEOs you researched were nontechnical and only 30% had domain expertise in the industry they were disrupting. The latter may surprise readers particularly.

AT: Yes, 30% of founders in consumer tech and 40% in enterprise tech did not come from the same domain [that their company now operates in]. And I see the same thing in startups that are just now getting funded. What it tells you is that domain expertise is not necessarily correlated to success.

Take Nat Turner of Flatiron Health [a cancer-focused start-up that sold to Roche Group in 2018]. These guys were serial entrepreneurs and they had a bunch of successes before, and they jumped from one industry to another, starting with a pizza delivery company they started in college, where they learned about the restaurant industry and deliveries and logistics. They also sold an ad tech company to Google. Then they go and start this company in the cancer oncology IP and data space, where they didn’t know anything, but they learned as much as anybody after spending two years going and talking with every oncologist they could find in New York to understand the space. So maybe founders apply their tech background to different industries or they apply software skills like resources and connections to learn about a specific industry rather than coming from that industry.

TC: What did your research tell you about funding? We’re seeing companies raise bigger rounds faster than ever before, including from Tiger Global.

AT: I don’t specifically have any brilliant thoughts on Tiger or anyone else, but these unicorns that I studied — even in their seed round and Series A rounds, they had raised two to three times larger rounds than the companies that did not become billion dollar companies. The kingmaker strategy kind of works.

Written By
admin
More from admin
A technical system underpinning the European Union’s plan for a pan-EU ‘digital...
Read More