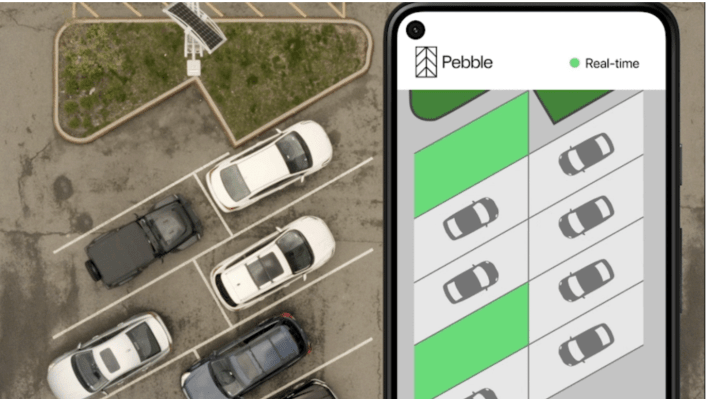 Here’s how it works: small spherical sensors are stuck to the ground on parking spaces to note the absence or presence of a vehicle. Then solar-powered gateway hardware, which can be strapped easily to street poles, uses IoT to connect the sensor to the cloud through the cellular network. The data is then viewed and analyzed by real estate developers, parking operators or municipal agencies via a dashboard.

Pebble doesn’t use cameras or collect identifying information about a person or vehicle, and is touting a “privacy preserving” approach. Sidewalk Labs has been relatively quiet since it shut down its $1.3 billion tech-enabled real estate project in Toronto amid privacy concerns a year ago. Rather than try to tackle large urban infrastructure projects, the company appears to be focusing its efforts on smaller scale solutions that can be used by private and public entities to improve cities.

New York City’s Metropolitan Transit Authority relied on Replica during the pandemic to adapt its public transit schedule. Now, as the country begins to open up in earnest, those with a stake in parking and mobility, especially cities looking to unroll sustainable transport recovery plans, might consider using tools like Pebble’s to manage parking supplies effectively.

Between 9% and 56% of traffic, and all the pollution that comes with it, is caused by people who are cruising for parking. Pebble says its real-time parking availability can be integrated into navigation apps, like Google Maps, through an API to help users spend less time circling the block.

“Real-time parking information can also alert would-be drivers when spaces are limited before they even leave home, leading them to use alternative travel modes, such as park-and-ride transit or ferries,” wrote Sidewalk Labs’ senior creative technologist, Nick Jonas, in a blog post announcing the launch. “For example, a smart parking program at a BART park-and-ride station reduced driving by a monthly average of nearly 10 miles per person — and even shortened commutes.”

While cities could certainly benefit from a tool that could monitor curb and municipal parking, the effort involved could be enormous. Imagine a city like New York widely placing individual sensors to mark street parking spaces! It would be quite the job, not to mention difficult to define static parking spaces. Pebble says it is already working with pilot customers to manage tens of thousands of parking spaces, but it did not reply to a request for more information about whether or not any of those pilot customers are cities.

In the blog post announcing the Pebble launch, Sidewalk Labs covers a range of potential use cases. City agencies that apply Pebble hardware to curbs can also gain insights on how to help businesses generate revenue by assigning relevant curb space for things like outdoor dining and applying flexible programs like dynamic pricing, which adjusts on-street parking rates based on supply and demand.

Pebble also says real estate developers can use its insights to create shared parking zones or build less parking if they can prove to cities that sufficient parking already exists to meet demand.

“Pebble can help […] prove that parking demand can be met through existing spaces or shared parking zones, reducing the need to build new spaces,” Jonas said. And in terms of traffic generated by drivers searching for spots, Pebble can help by “facilitating direct navigation to a parking space,” which can make a dent in the “30 percent of traffic congestion that occurs from drivers for a parking space.”

On top of those infrastructure benefits, Jonas notes that Pebble can help with economic and convenience incentives that encourage commuters to opt for other methods of transit instead of driving.

“By facilitating dynamic pricing programs, Pebble can help cities “right-price” parking and encourage alternative travel modes,” he noted, adding that based on early data from pilots in the Bay Area, Pebble data including “direct navigation and real-time space availability data can also encourage people to use park-and-ride transit rather than driving all the way into an office.”

Much of the operating thesis upon which Sidewalks Labs is based is that cities would be able to run much more efficiently, effectively and safely if they can just address the existing data gaps and blindspots about how people actually live in, and navigate them. Pebble looks like it could be a key ingredient in help fill in the blanks for parking and garage usage.