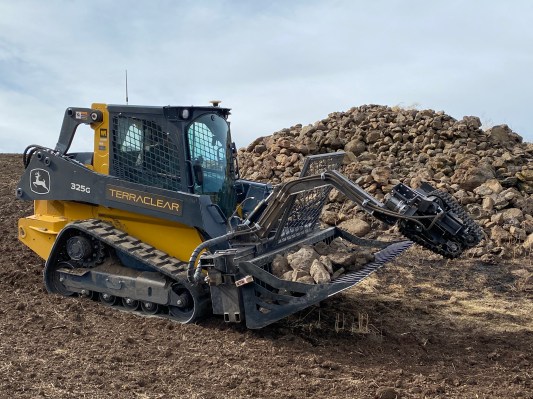 Rock picking is probably not the first thing you think about when you think agricultural robotics. Understandably so. There are a number of companies out there looking to automate aspects like fruit and vegetable picking, weeding and field tending, but rocks are still a major issue for many farmers. They’re big, they’re heavy and they can really mess up a piece of machinery.

“This is something I’ve personally dealt with my entire life,” TerraClear CEO and Brent Frei said in a press release. “There are more than 400 million arable acres worldwide that have been waiting for a cost-effective and productive solution to this problem. Repetitive tasks like this are optimal targets for automation, and the technologies we are bringing to the field dramatically reduce the labor and time needed to prep fields for planting.”

TerraClear has built an automated robotic solution, capable of picking up to 400 rocks per hour and picking and moving ones weighing up to 300 pounds. Back in 2019, the Bellevue, Washington based company announced a $6 million dollar raise to expand its offering, and today it’s announced a $25 million Series A.

Madrona Venture Group  returns to lead the round, which brings its total funding up to $38 million to date. The funding will go toward scaling up the company’s production and sales for next year, as well as growing headcount. TerraClear’s Rock Picker robot is now up for pre-order. The system works with mapping and 3rd party drone systems, using AI to identify large rocks, which the robot can then be deployed to clear out.

Written By
admin
More from admin
We’ve all heard the adage, less is more. But when it comes...
Read More